The written responses presented by the United States and NATO to Russia’s security demands fail to address Moscow’s concerns over the eastward expansion of the military alliance, Russia’s Foreign Minister said Thursday as fears of a possible invasion of Ukraine remain high.

“There is no positive reaction on the main issue in this document,” Sergey Lavrov told journalists in Moscow. “The main issue is our clear position on the inadmissibility of further expansion of NATO to the East and the deployment of strike weapons that could threaten the territory of the Russian Federation.”
Tensions between Moscow and Kyiv are at their highest in years, with a large Russian troop buildup near the shared borders of the two former Soviet republics.
Russia has repeatedly denied it is planning an invasion but has argued that NATO support for Ukraine — including increased weapons supplies and military training — constitutes a growing threat on its western flank.
Lavrov explained the US and NATO had previously agreed within the context of the Organization for Security and Cooperation in Europe (OSCE) not to expand at the expense of Russia’s safety.
“We present non-verbal promises, written documents signed by the leaders of all the OSCE countries, including the President of the United States (Istanbul Declaration of 1999, Astana Declaration of 2010), our Western partners have to get out from a more serious situation,” Lavrov explained. “This principle is clearly stated. It has two main interrelated approaches. First, the right of every state to freely choose military alliances is recognized. Second: the obligation of each state not to strengthen its security at the expense of the security of others.”

Russia and Ukraine agree to continue ceasefire talks
“In other words, the right to choose alliances is clearly conditioned by the need to take into account the security interests of any other OSCE state, including the Russian Federation,” Lavrov concluded.
The Russian Foreign Minister conceded the responses by the US and NATO could lead to serious discussions but only on secondary issues.
“There is a reaction there that allows us to count on the beginning of a serious conversation, but on secondary topics,” he said.
Kremlin spokesman Dmitry Peskov echoed the same concerns on Thursday, saying on the surface, Russia’s prime concerns had not been addressed. He however refused to give an official definitive answer to the responses presented by the US and NATO.
Peskov told journalists during a conference call that Vladimir Putin had read the written responses from both the US and NATO, but added that Russia’s President and his government won’t be rushing into any conclusions.
“The President already read the written responses,” he said. “All the papers are with the President. It will take some time to analyze them, we will not rush to any conclusions.”
Russia’s official response would not take long but Peskov cautioned it wouldn’t happen straight away. 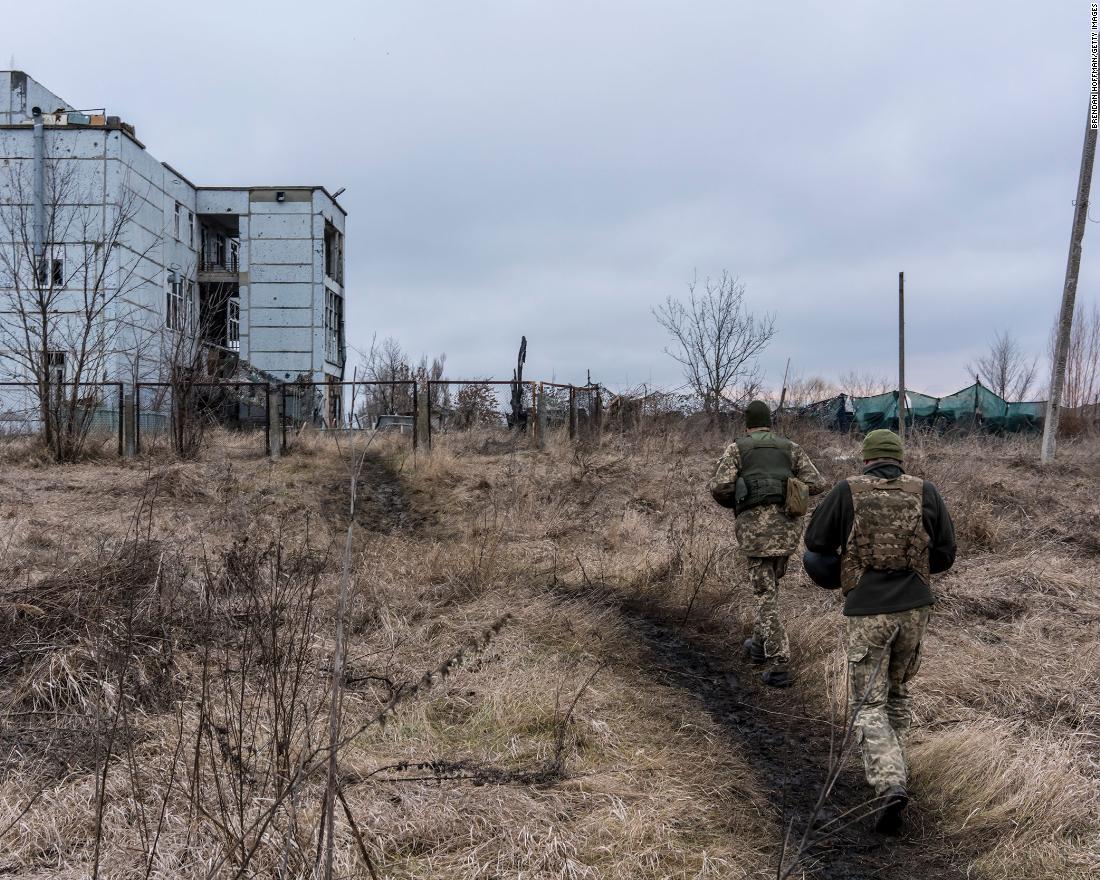 Photos: Tensions rise between Russia and Ukraine
Ukrainian servicemen of the Mechanized Brigade drive vehicles at an undisclosed location in the Luhansk Region, Ukraine, on January 25.

US Secretary of State Antony Blinken said Wednesday the US’s written response to Russia “sets out a serious diplomatic path forward should Russia choose it.”
The US has repeatedly said Putin’s central demand, that the US and NATO commit to never admitting Ukraine to the alliance, is non-negotiable.
Blinken declined to detail specifics presented to Moscow in the written response, but reiterated the West’s public response to uphold NATO’s “open-door policy,” rejecting Moscow’s demands that NATO commit to never admitting Ukraine.
“There is no change. There will be no change,” Blinken said of US and NATO support for the alliance’s open-door policy.
“We make clear that there are core principles that we are committed to uphold and defend, including Ukraine’s sovereignty and territorial integrity, and the right of states to choose their own security arrangements and alliances,” he added.
NATO’s Jens Stoltenberg said Wednesday that the alliance’s written response was sent in “parallel with the United States.”
Although the positions of Moscow and the alliance are “far apart,” the NATO chief outlined three main areas where NATO sees “room for progress.” He asked that Moscow and NATO reopen their “respective offices in Moscow and in Brussels.”
It is unclear whether the latest diplomatic overture, which Moscow had sought, will change the course of talks between Russia and the West that have continued over the past several weeks.
Russian Deputy Foreign Ministry Alexey Zaytsev told journalists Thursday that they consider the idea of war between Russia and Ukraine “unacceptable” adding that a discussion on a ceasefire in eastern Ukraine in Paris “was not easy” and ended without result.
He was referring to Wednesday’s meeting of the so-called Normandy Format — a four-way conversation between representatives from Ukraine, Russia, Germany and France — that has been trying to broker peace in eastern Ukraine since 2014.
Ukrainian President Volodymyr Zelensky made a positive assessment of the talks, in a Thursday statement that described the discussion as meaningful. Zelensky is scheduled to speak with US President Joe Biden on Thursday and is expected to convey that he believes the US and its allies have to be more careful with their messaging surrounding the conflict, a source familiar with Zelensky’s thinking told CNN.
Zelensky has been particularly concerned about the US’ rhetoric that war could be “imminent” — a word White House Press Secretary Jen Psaki used earlier this week to describe the US’ assessment of Russia’s plans, the source said. Recent disclosures of intelligence to US media, the source added, “is causing panic and economic disaster for Ukraine.”
Russia’s Zaytsev said he hoped for a different outcome when the four countries meet again in Berlin in two weeks. “There is no alternative to the Minsk agreements,” he said in reference to the framework for peace in the region that has repeatedly failed since it was first partially implemented in 2015.

Ukrainians — who have been at war for nearly eight years since Russia annexed Crimea and Russia-backed separatists took control of the eastern Ukrainian cities of Donetsk and Luhansk — are desperate for reprieve from the drumbeats of war.
In an opinion article published on CNN, Olesia Markovic described how the Russian troop buildup at the border was ringing alarm bells for Ukrainian society.
“People admit the uncertainty and the lack of clear emergency instructions are draining their intellectual and emotional resources, making it hard to focus on current tasks and their ability to make long-term plans,” she writes.
On Thursday, Ukrainian Foreign Minister Dmytro Kuleba said Moscow, not Kyiv, must make concessions to defuse tensions in the region.
“The logic that Ukraine always has to make concessions in order to prevent Russia from being more aggressive… doesn’t work this way,” Kuleba told journalists during a visit to Copenhagen.
“I firmly believe that it’s important for Western countries to succeed in this particular crisis, for the reasons that I mentioned, because in recent years, Russia has been attacking not only Ukraine,” he said, pointing to Moscow using gas supplies, alleged cyberattacks and other tactics to hit the West.